Continuing the discussion from UP Studio 3 Issues:

New here, installed yesterday the new BETA Studio-3 yesterday.
No problems (yet), and very impressed with the version 3.0.11options.
Great work from the UP!-developpers.

I am a long time UP! user with a UP! MINI V1 and a BOX V1.
Both running great!
I did have some small issues over the years, but nothing unfixable.
Software and printing results only got better.
Next expecting a CETUS V3 to put to good use

Just a few questions:
Is it possible to use the older MINI-V1 and BOX-V1 with this newer software ?
If I look at the printer options this should be no problem,
but before switching I would like to know for sure.

Next to that I noticed a second extruder option.
Is that maybe for future use?
Another setting at the extruder section is scale factor.
Is the purpose of this setting to increase the feed (increase speed of the steppermotor)? 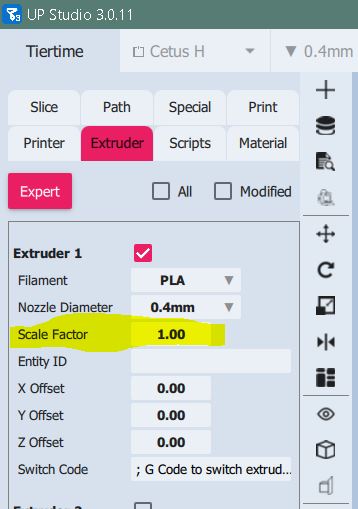 Greetings from the Netherlands.
Chris.

Thanks Jason, sound good to me!

Did you connect to your printer in Wand?

1.4 You can change this only in config file with text editor, for example with notepad++. You need to edit file C:\Users\YOUR_USER_NAME\AppData\Roaming\Tiertime\UP Studio\default.conf.
There is for UP Mini second place in this section (for my up mini it is 10104 instead of 10112):

1.5. Now exactly you can print, but it is going REALLY WRONG (with good Z-Offset your printer start with nozzle in bed, because it is not ready for my up mini :)), and some seconds later bed is going too much back with error “MOTION X”.

2.1 Then you can modify second parameter “Z Offset” (of course only with editor: in config file).

II) With PrusaSlicer and Up Studio 2
It was better with result, but a lot of work.
I was using some script from internet (some postscript from Cura) as pattern and I wrote some scripts which do modifications to “*.gcode” from PrusaSlicer v.2.2.0. I printed this modified file the same way like in point 3.1. I can use f.ex. skirt from Prusaslicer in first layer (without problem with wrong value of Z).