I’d like the print head to move out of the way when we pause prints to insert hardware. Currently the print head remains directly over the part, exactly in the way. I’d rather not remove the print bed if we don’t need to. 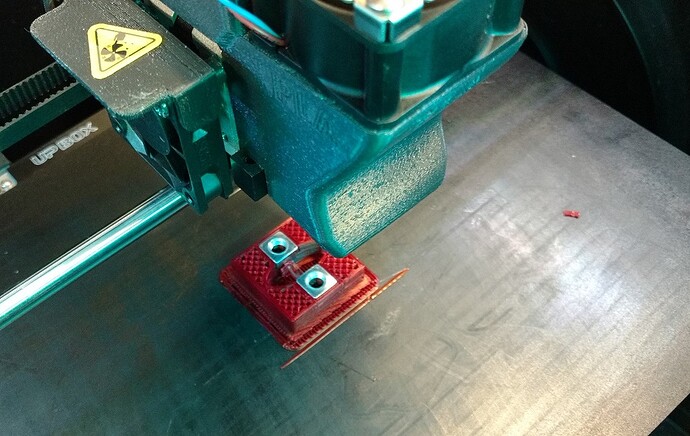 This could be handy if you need to do manipulation during mid print.
However more it moves after pause, the more error it will introduce when try to go back to the original position.

Surely if the motors remain energized the motion system should remain as accurate as during printing.

Hmm, the print head moves thousands of times during a print without losing its position, I’m sure it could do one more:space_invader:

On a serious note I printed this part 3 times:-

(1) On an Upbox in PLA. It made a nice part, I was able to remove the bed, pull out the support, place the fittings and make a nice part. - PASS
(2) On an UPBOX+ in ABS with the support removed via UPStudio (very nice by the way) but as soon as I removed the bed the build plate bowed. As soon as I straightened it to refit it to the machine the part fell off the bed. If the head wasn’t in the way I wouldn’t have had to remove the bed… If studio let the user increase the raft size then there wouldn’t be an issue.
(3) On a Markforged machine. Their slicer didn’t have the option to remove the supports, so TT win there, but the head did move out of the way, and their bed attachment method is amazing (but patented).

So there is some good stuff in the TT software but development needs to keep going.
Cheers, Owen S.

the feature request was delivered to software team, they told me that the extruder head is ready to move during pause, just need to add some new buttons on the pause interface, likely updated in the next version.

This is where not being able to update the printer and screen firmware is a “problem”. This would become so much more useful if the print head could be raised from the screen.

Offering a overpriced new board which is also not upgradable as a solution is pretty much adding insult to injury when all we need is a serial cable and a 3-400kb binary file? Or if there is a fancy bootloader, you’d only need a sd card reader - both of which your average 3d printer enthusiast today is comfortable with, and the internet is full of instructions for similar hardware platforms.

Are we talking Upbox Mini2 or UP300 here? I thought the latter two were upgradable?

Also in this “move head” instance the move command will be in the GCODE-ish file sent to the printer so should be good even on an upbox.

All that being said not being able to update the firmware in any product in this day and age is inexcusable. Most of our products can be updated remotely and wirelessly. Software updates are seamless, when you log into the web portal you’re automatically using the latest version, and FW updates happen automatically in the background… So not being able to update something sitting on a desk in-front of us is hugely frustrating.

Not all are, thats the issue; based on the same platform as far as I can tell, and its not even a technical limitation or challenge.

Sure pressing a button in the software will still work for all printers, unless they do something weird which caused generic g-code not to be supported by all printers in the first place. But supporting a non standard subset of gcode and putting a gigantic price tag on an hardware update to fix a software issue, well, nuff said.

Sorry we are talking about adding new buttons to UP Studio’s pause interface. So it should support all printer models. For UP300, yes it is also possible to update the touchscreen firmware to implement this change.

But sorry we are not adding a touch screen to the UP BOXs.

Sorry we are talking about adding new buttons to UP Studio’s pause interface. So it should support all printer models. For UP300, yes it is also possible to update the touchscreen firmware to implement this change.

But sorry we are not adding a touch screen to the UP BOXs.

I’m not saying you should add touch screen to up box, but those printer that have touch screens would be much more usefull if the touch screen had new buttons when paused - as you can see better form the pritner than the computer. What is sad is that Up Mini 2 (and others) has touch screen, but cannot be updated, or rather will not be updated.