While I didn’t initially buy the Hemera for the Up mini, it most certainly looks like it can be a good fit. Will first install on my i3 rework and update this if I make the necessary adapter and cooling shroud

(both the change in e-steps and additional cooler will likely mean new controller, which is fine as I have a few Duet3D boards eager to get into the mini 2.) 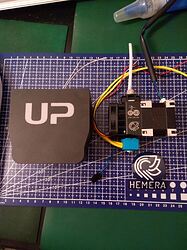 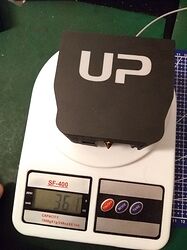 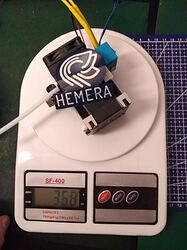 Seemed to fit, even with the over-sized fan grill because to too long screws. Initial test show full range of motion, might even be possible to increase the travel a little with alternative firmware! 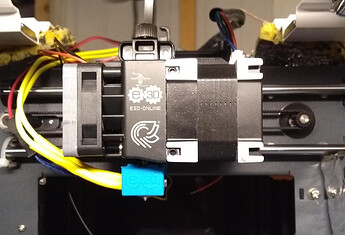 Interesting discovery, if you ever proceed with this mod please update us! If it works out well I may be tempted to have a go, recently I have been having extrusion issues with the tiertime extruder (which seems fairly common judging by the forums, constant extruder motor skipping).

the second picture is the extruder mounted with a custom part that clip on just like the original; but without the option to change the e-steps in the firmware or compensate in slicer its no good on its own.

i might test and release the file if the next catfish can tune the slicing to work with the gearing of the hemera.

if not, it’ll be a while before I get back to the Duet3d conversion, the old forum has a long thread on how to install a Duet 2 Maestro (Duet 2 wifi or ethernet will also fit) with a PanelDue that also replaces the touch screen with a almost plug and play setup. I had to revert to the Tiertime board to print some proprietary files and got a bit derailed as the linear bearings broke down as well.

When I can print petg on my i3 rework I’ll also replace the linear bearings with some linear guides from hiwin, and wrap up the conversion to incude a new motherboard, new bed, new linear rails and new extruder…